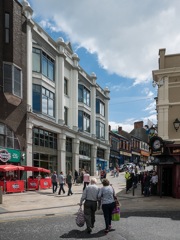 Heritage Lottery funded Townscape Heritage Initiative schemes across Northern Ireland have been delivering economic and social regeneration through the restoration and repair of historic buildings since 1997.

To date the Heritage Lottery Fund have made twenty-two awards to towns and cities across Northern Ireland totaling circa £16.5 million.

Purpose of the Initiative:

The purpose of the Townscape Heritage Initiative is not only to enhance the visual appearance of the environment, but to improve the physical, economic and social conditions of the Conservation Area in which the scheme is in operation. The purpose being that the areas may succeed as retail, cultural and residential areas, with an emphasis on vibrant mixed use economy, providing a safe and attractive environment in which to work and live while injecting a pride of place and supporting independent shops and small businesses with unique identities and styles.

The Heritage Lottery Fund provided a grant of £1 million for Phase l, which when partnership funding and owner contributions were included, resulted in an overall investment in the built heritage of the Townscape Heritage Initiative in the region of £4.5 million. The Walled City Partnership secured a further £1.669 million for a second phase which commenced during November 2010. The purpose of the Phase ll was to build upon and reinforce the positive impact of the first phase.