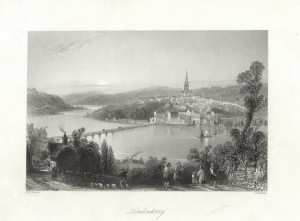 The Significance of the Walled City

Highly significant in a global context, the walled city of Londonderry is the multi-facetted jewel in the crown of James the First’s early seventeenth century Plantation of Ulster.  Forged on the anvil of conflict it is, arguably, the most beautifully sited city on the island of Ireland.

Created to protect incoming English and Scottish Planters from the native Irish, it is one of twenty-three new towns proposed by the town planners of the day, under the 1609 Regional Plan for Ulster.  The only one of these enclosed by defensive walls, its formation (built and paid for by London’s livery companies) began in 1613 and was complete by 1619.

The first example of true urban planning in Ireland, Derry’s walled city streets were laid out on a formal grid pattern that derives from Roman military planning.  The roots of this thinking can be seen in the ruins of Pompeii.  Though undoubtedly of Ulster, Derry’s walled city is also European and classical – a highly significant, distinctive cultural heritage asset – for everyone in these islands.

Ulster Plantation towns are immediately identifiable by a central space called ‘The Diamond’ though, curiously, none is diamond shaped.  This urban heritage collection is unique in Britain and Ireland.  Europe’s youngest walled city (the last in Ireland with intact walls) rises from the strategically defensive ‘Hill of Derry’.   Its stunning setting overlooks the broad sweep of the majestic River Foyle, taking in panoramic views east towards The Sperrin Mountains, and Inishowen Hills in the north.