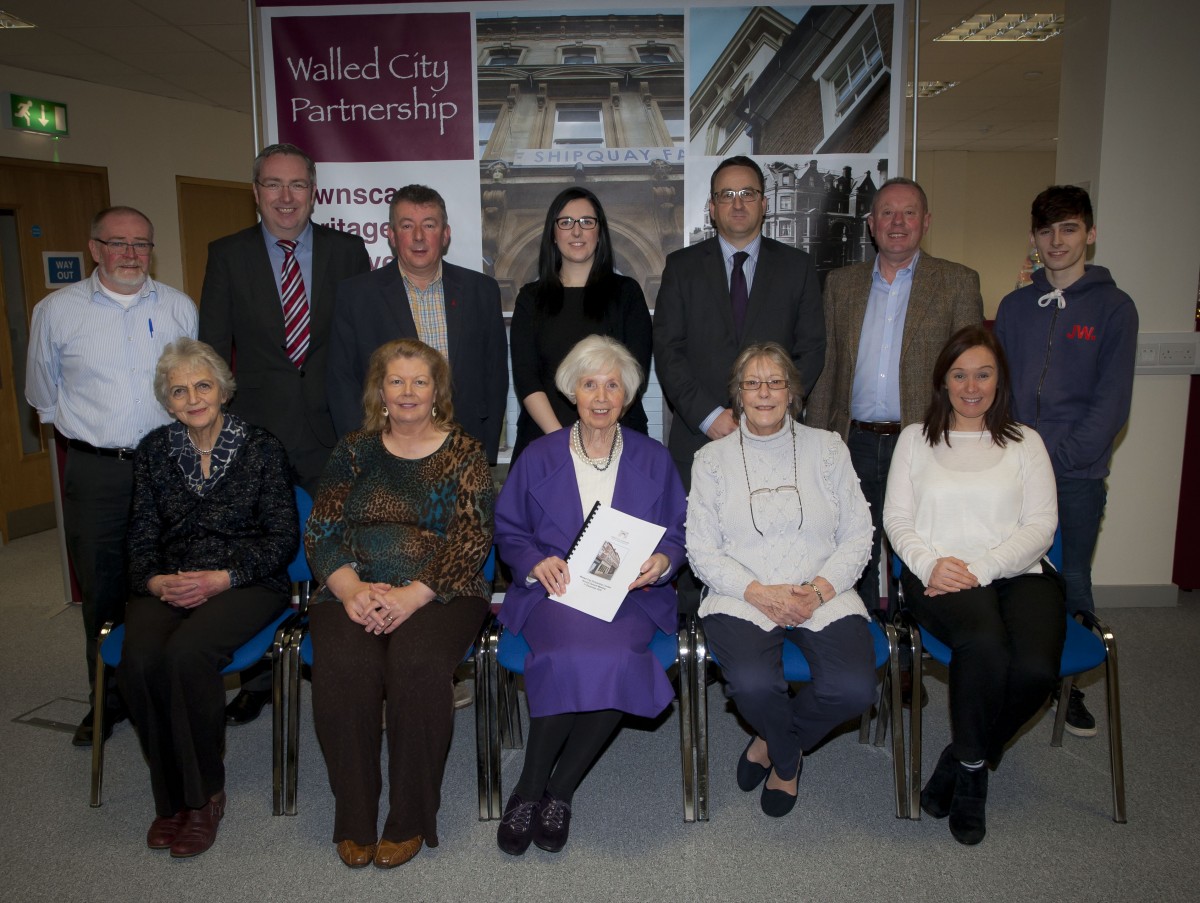 We are now fully ensconced in our new office space and you are all very welcome here today.

I won’t reiterate the aims and objectives of the Townscape Heritage Initiative and the role of the Walled City Partnership team as we have been administering the scheme since the year 2002.

The Project Officer, Ronan O’Donnell, will refer to most of it in his presentation as we proceed.

WCP monthly meetings were held as usual on the last Thursday of each month, as you are aware the amalgamation of Derry City and Strabane District Council (DCSDC) is up and running, at present we do not have a Strabane representative on the WCP Board but we understand that many issues within the new council have yet to be resolved.   Board members raised the importance of having council representatives who have an overall knowledge and interest in the built heritage of the area being nominated to sit on the WCP Board.

On a sad note, Joe Tracey has tendered his resignation for health reasons. Joe has been a dedicated and passionate advocate for the restoration and regeneration of buildings within the historic conservation areas of the city for many years. A founder member and past Chairman and President of Foyle Civic Trust he was instrumental in the formation of the Walled City Partnership.  Joe’s expertise in conservation architecture has been invaluable throughout the past sixteen years.   We wish him well in his retirement.

We are delighted to have acquired Peter Tracey to join the WCP Board. Peter, a local architect who has the experience of working on THI projects and is a member of the Historic Buildings Council will be a valuable addition to the Board.

PROJECTS COMPLETED IN THE PAST YEAR:

The Coyle Building formerly known as the Property Exchange Building at the junction of Magazine Street and Castle Street now houses a ground floor restaurant with residential accommodation on the upper floors. The Building creates quite an impact on the corner site and looks fantastic when viewed from The Walls.

Almost completed is the former Provincial Bank building owned by Liam Cregan, it is disappointing that the opening of the building, now converted to a boutique hotel and making a dramatic impact on Shipquay Street has been delayed, however, the news is promising that a date will be set soon for the opening of the hotel.

Both of these projects fulfill the HLF regeneration targets of providing employment and residential accommodation within the city centre.

Other schemes where completion was reached in the last year include the Inner City Trust Building, No. 25 Shipquay Street and No 10 Waterloo Street.

As we approach the completion of the Phase ll Townscape Heritage Initiative, we have one major project waiting for the outcome of the DfC urban development grant process, a hotel development located at Shipquay Place and Foyle Street. Colin Greer (DfC advisor) keeps WCP members updated on its progress. We also realise that due to the changeover in local councils this is a time consuming exercise for both civil servants and recipients of the grant. Our thanks to Colin for his advice and information on this crucial issue.

Four other projects are being proposed in advance of the close of the second phase, Ronan will elaborate on these.

It would be very satisfying to commence work on the final projects in the New Year in order to complete what has been a tremendous body of work carried out by WCP, researching; regenerating; repairing and reviving so many architectural gems in our historic city conservation area and not least adding commendably to the local economy.

In February, Ronan O’Donnell and I met with Angela Lavin to request an extension for the closure date for Phase ll.   The implications of the DfC urban development grant were discussed and we explained that property owners were reluctant to engage in negotiations until terms were finalised by the Department.   Angela Lavin was sympathetic to our dilemma and agreed to extend the date provisionally but stressed the need to be kept fully informed of developments

Amidst all the recent cutbacks it was re-assuring to note the following:

Earlier this year the DfC Historic Environment Division introduced the Historic Environment Fund under the headings of Research; Regeneration; Repair; Revival. This will replace the Listed Building Grant Scheme. A welcome message also from NIHE announcing its Heritage in Housing grant supporting the residential element of THI projects.

A proposed Decorating scheme in the historic city conservation area, led by Council and with financial support from the DfC NW Development Office, will assist in returning many of the early THI projects to their post restoration pristine condition coinciding with the close of the phase ll.

It was agreed that a book would be published to celebrate the closure of the Townscape Heritage Initiative’s Phase l and ll projects.   HLF was approached for confirmation and advice, tenders were advertised and the successful applicant was Liam Campbell.  Liam made a presentation to WCP Board members on his initial research.     He has since acquired a position delivering the HLF landscape project at Lough Neagh but assures us that he can continue with the publication.  We look forward to Liam’s presentation later in the meeting.

During the year, the P.O. gave talks / presentations to The Foyle Family History Society; The U3A; at the launch of the Carrickfergus THI; and to DCSDC Environment & Regeneration Committee in the Strabane Council offices.

In June, Council hosted the visit of the Building Limes Forum Ireland to the City and Ronan assisted in both the organisation and delivery of this event. The event was very well attended and feedback was very positive.

WCP had a visit from Andrew Haley, Paul Hogarth Company, to inform us of the Inner Walled City Public Realm Project, this was followed by a very lively discussion with a lot of interesting suggestions put forward by Board members.

We also hosted a visit from HLF Committee NI along with Trustees from all parts of the UK. They wanted to see all the buildings completed by WCP as well as those under construction.   A walk around The Walls was also on their list and as many of our THI projects can be viewed from The Walls, this worked out very well.  They were very impressed.

Ronan O’Donnell put forward an application to APSE for the “Best Public / Private Working Initiative 2016”. The Application was short listed but unfortunately unsuccessful. An application to the National Lottery Good causes awards was also unsuccessful although the THI scheme was subsequently chosen as the heritage project to be showcased as part of a new HLF online promotional video.

UAHS contacted WCP and Foyle Civic Trust to help set up a Seminar entitled “Your Heritage – Your Voice”. It was held in the Green Room of the Guildhall on 18th October. Nikki McVeigh,

Director, UAHS introduced the speakers, unfortunately, after all the effort that Ronan put into the preparations for the event, he had to miss it as he was ill and couldn’t attend. A flyer for the event is appended for information.

Of the utmost importance following on from the final projects of Phase ll is the groundwork necessary for Phase lll, this will be a challenging exercise mainly because of the amalgamation of Derry and Strabane councils. The P.O. has already given a presentation to Councillors in Strabane outlining the criteria for the THI projects carried out by the WCP.

Whilst we are aware that we cannot apply for the Townscape Heritage grant until we have substantially completed the Phase ll we know from past experience how time consuming it can be to identify areas, buildings, eligibility, costings etc; therefore a comprehensive, preparation programme is essential.   It’s not too early to get the thinking caps on.

My sincere thanks to all of you, we are a great team and should be very proud of the part we have played in further enhancing our historic city. And finally, a special word of thanks to Ronan O’Donnell whose meticulous reports each month keep us fully informed. He has furnished us with maps, spreadsheets etc; which would be the envy of many multi-national companies. His preparation for the various workshops, lectures and seminars throughout the year ensured that everything ran smoothly.  Well done Ronan.