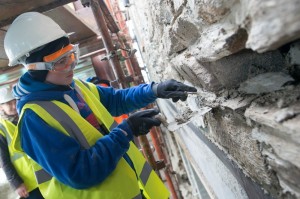 An unfortunate side effect of the Troubles in Derry~Londonderry has been a relatively low level of interest in, and awareness of, heritage in all walks of life.  From the outset it was clear that a programme of advertised lectures and workshops, however fascinating, would likely preach only to the converted.  Instead, a dynamic opportunistic strategy was initiated to engage wide-ranging target audiences, almost unbeknownst to them.  Live heritage issues locally, are used as the vehicle for rapid, meaningful learning.

Initiated in 2011, and the first of its kind in Northern Ireland, our strategic approach and innovative interactive methods have generated an effective education programme, raising awareness and appreciation of heritage among everyone, from Government Ministers and local councillors, senior civil servants, property owners, construction trades-men and women, and professionals, right through to staff, students and pupils in learning institutions at all levels.

Home » Our Work » THI » Learning For All