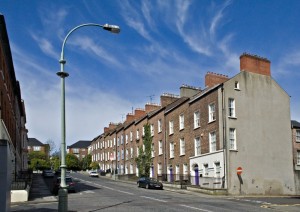 As part of the pre-UK City of Culture 2013 street clean-up, removal of old cast-iron streetlights in two of Derry’s finest Georgian streets, prompted adjacent property owners to voice concerns.
Told these were being removed for fear that vehicular impact would cause the old cast iron to shatter, and could cause a pedestrian fatality, the authorities advised, with conviction, they were beyond repair.  But it turned out their condition hadn’t ever been properly inspected or analysed.

In its research Walled City THI discovered these were Northern Ireland’s last collection of historic streetlights, perhaps the oldest on the island of Ireland, and nationally important.  Their replacement with reproductions bearing no resemblance to the originals, stirred Walled City Partnership efforts to halt further removal of the old lamp posts through official channels – to no avail. Work to remove the lamp posts recommenced.  The sight of historic Mourne granite kerbs heading off on the back of a lorry to the local dump, signalled it was time to circulate our briefing findings to journalists and the wider community. A media storm erupted across all outlets.

Directed, by the SPAB Technical Helpline, to master heritage ironworker Geoff Wallis in Bristol, our circulation of his invaluable guidance on the ins and outs of repairing historic cast-iron columns informed a second article on the subject by Derry journalist Eamonn McCann article. Within days, the rape of Derry’s cultural townscape heritage had ceased.

By the end of 2013 three different types of old cast-iron lampposts in nearby Asylum Road, had been repaired and reinstated to best conservation practice.  The old Mourne granite kerbs and setts remain where they are.

Rita Harkin, Research Officer at the Ulster Architectural heritage Society commented on the streetlight campaign; “I hadn’t fully grasped the extent of the success of the campaign. Well done! It just shows what a persistent, collaborative effort can achieve”